Nina (Sanae Loutsis) is only twelve years old, when she loses her parents in a car accident. Now living with her aunt, Nina is no longer in the best of company. Escaping into her imagination and into the woods, she meets a strange, masked man. He should not have been brought home. Now, his murder spree is just getting started with Aunt Erma (Joy Yaholkovsky) and the local townsfolk, in this brutally bloody horror film! 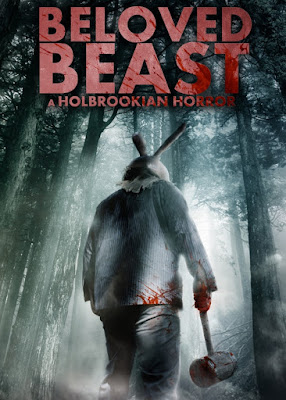 Beloved Beast will have a limited theatrical release, before launching on DVD and Digital platforms. On October 11th, this epic horror feature will show in: Los Angeles, New York City and Chicago. Several filmmakers will be in attendance at the Los Angeles screening and provide a Q & A, after the film. As well, Beloved Beast will show on DVD and Digital platforms on this same date. Rated Restricted, Beloved Beast promises a terrifying time, spent with one of this year’s strangest killers. See it this October!

The film’s official synopsis: 12 year old Nina loses her parents in a car accident and is forced to live with her unstable Aunt Erma. Except her aunt dabbles with drugs, partying and every other thing an aunt shouldn’t do. When Nina meets a stranger in the woods, instead of running, she brings him home. Not realizing that the man she has brought home is an escaped mental patient with a penchant for murder…
Release Date: October 11th, 2019  (Limited Theatrical, Digital, DVD).