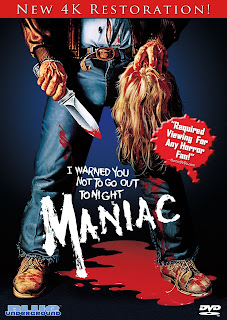 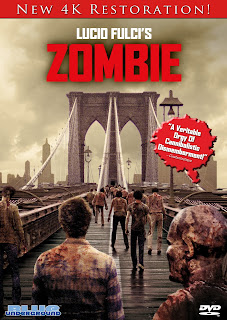 Blue Underground is proud to announce their most recent 4k restorations, coming to DVD for the first time this December. Just  in time for Christmas, you can treat yourself or the horror afficianado in your life to 2 of the greatest pieces of celluloid depravity to ever grace the screen. Psersonally, I admire both of these films, and looking forward to seeing not just rhe nnew resolution, but the loads of extras that will accompany them. Let's get into the details of these releases.

Up first is MANIAC. This is one of those films that you can never be prepared for as a first time watch. The depravity and madness witnessed in this filmed are not for those of a weak constitution. Ladies and gentlemen..... MANIAC.

"Frank Zito (a career performance by writer/executive producer Joe Spinell of ROCKY and THE GODFATHER fame) is a deeply disturbed man, haunted by the traumas of unspeakable childhood abuse. And when these horrific memories begin to scream inside his mind, Frank prowls the seedy streets of New York City to stalk and slaughter innocent young women. Now Frank has begun a relationship with a beautiful photographer (Caroline Munro of THE SPY WHO LOVED ME), yet his vile compulsions remain. These are the atrocities of a human monster. This is the story of a MANIAC."
Directed by William Lustig (MANIAC COP 2, VIGILANTE) and featuring landmark gore effects by Tom Savini (DAWN OF THE DEAD, FRIDAY THE 13th), this relentlessly shocking and disturbing film was originally banned or censored all over the world due to its graphic violence. Now Blue Underground is thrilled to present MANIAC in a brand-new 4K Restoration from its recently discovered 16mm original camera negative!

Reviews:
• “Some Of The Most Unprecedented, Graphically Detailed Depictions Of Violence Ever Put Before A Viewing Audience!” – Rue Morgue
• “One Of The Darkest Films Of All Time… Required Viewing For Any Horror Fan!” – HorrorDVDs.com
• “An Undiluted Expression Of Urban Horror… A Formidable New York Grunge Flick Through And Through!” – Cinepassion
• “Forget Tarantino & Rodriguez… This Is The REAL Grindhouse!” – eFilmCritic.com
• “A Grimy Snapshot Of Early ‘80s Manhattan And An Unapologetically Twisted Study In Pathological Murderousness!” – Lessons Of Darkness


Next we have what many consider not just the best Italian horror of all time, but one of the absolute best unholy reanimated flesh eating rot bag films of all time. Inspired by and by ripping off George A. Romero's Dawn Of The Dead (and Dario Argento's Italian cut), Lucio Fulci attacked every sense we have with his unapologetic unofficial sequel that fan worldwide love and hold high. Let's get into the details for ZOMBIE!

"In Italy, it was considered the ‘unofficial sequel’ to DAWN OF THE DEAD. In England, it was known as ZOMBIE FLESH EATERS and banned as obscene. In America, it was called ZOMBIE and advertised with the depraved tag line "WE ARE GOING TO EAT YOU!" Tisa Farrow (THE GRIM REAPER), Ian McCulloch (CONTAMINATION), Al Cliver (CANNIBALS), and Richard Johnson (THE HAUNTING) star in this worldwide splatter sensation directed by ‘Maestro Of Gore’ Lucio Fulci (CITY OF THE LIVING DEAD, THE HOUSE BY THE CEMETERY) that remains one of the most eye-skewering, skin-ripping, gore-gushingly graphic horror hits of all time!
In honor of its 40th Anniversary, Blue Underground is proud to present ZOMBIE in a brand-new 4K Restoration from the original uncut and uncensored camera negative. This is ZOMBIE like you’ve truly never seen it before!"

Sell Points:
• The worldwide splatter sensation returns in a new 40th Anniversary remastered DVD!
• New 4K Restoration from the uncensored original camera negative
• From acclaimed horror maestro Lucio Fulci (CITY OF THE LIVING DEAD, THE NEW YORK RIPPER, THE HOUSE BY THE CEMETERY, THE BEYOND, CAT IN THE BRAIN)
• Stars EuroCult favorites Tisa Farrow (THE GRIM REAPER, FINGERS), Ian McCulloch (CONTAMINATION, ZOMBIE HOLOCAUST), Richard Johnson (THE HAUNTING, BEYOND THE DOOR), Al Cliver (CANNIBALS, THE BLACK CAT), and Olga Karlatos (PURPLE RAIN, KEOMA)
• This is ZOMBIE like you’ve truly never seen it before!
• For fans of DAWN OF THE DEAD, CITY OF THE LIVING DEAD, and THE WALKING DEAD