In the words of Conner4Real, “Ever since I was born, I was dope.” 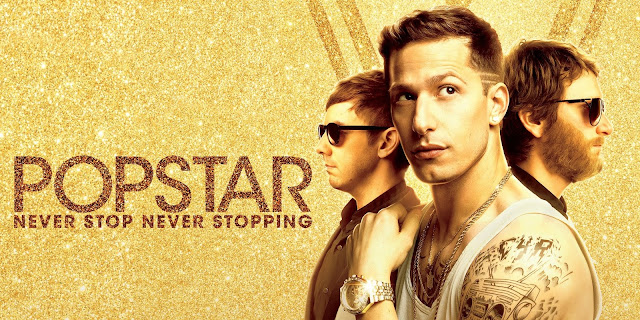 True that. In the three years since The Lonely Island’s musical mockumentary POPSTAR: NEVER STOP NEVER STOPPING premiered, the film’s cult status has grown to legendary proportions. It’s a film that needs to be seen with a crowd that knows all the lyrics and all The Style Boyz moves – that’s why next month 26 Alamo Drafthouse Cinema locations will exclusively screen an officially licensed POPSTAR Sing-Along.

“We're thrilled to partner with Alamo Drafthouse for this chance to give audiences a fresh, innovative experience at the theater with beloved films in our library,“ said Universal Pictures’ Jason Jackowski, Vice President – Repertory (Theatrical Distribution).

At Alamo Drafthouse’s interactive Quote-Along, Sing-Along, and Movie Party screenings, the cinema-eatery’s rules are relaxed and audience members are encouraged to celebrate the film with interactive elements, like on-screen lyrics for all songs, plus subtitles for key quotes, and props – the POPSTAR Sing-Along will feature inflatable microphones, glow necklaces, and ribbon wands.

“The most important prop we’re providing is probably the American flags for Finest Girl (Bin Laden Song),” says Henri Mazza, Alamo Drafthouse’s V.P. of Content, Sponsorship and Events. “Nothing makes me feel prouder to be an American than watching a crowd of people waving the flag while singing this patriotic tune.”

POPSTAR is just the latest cinema classic to get Alamo Drafthouse’s unique Quote-Along and Sing-Along treatment, with recent successes like LABYRINTH, SPACEBALLS, and ¡THREE AMIGOS! proving that audiences are keen to celebrate their favorite films in a movie theater.

“When we launched the Quote-Along edition of LABYRINTH, fans across the country sold out theaters everywhere for a chance to yell at David Bowie in unison as Sarah tells him 'You have no power over me!"” says Mazza, who developed the Quote-Along and Movie Party formats for Alamo Drafthouse. “The folks at Universal have been so helpful and engaged in helping us share this movie with its most passionate fans. And after the fun of POPSTAR, we’ll be celebrating with a 40th anniversary Quote-Along edition of THE JERK in November, with more to come in 2020.”

Tickets for the POPSTAR Sing-Along are on sale now at Alamo Drafthouse locations across the country. For more info, head to drafthouse.com.

About the POPSTAR Sing-Along
With a hilarious lead performance from Andy Samberg, tons of killer cameos including Maya Rudolph, Sarah Silverman, Usher, and Adam Levine’s hologram (so expensive!), and tons of big laughs and bumpin’ tunez, POPSTAR has established itself as a modern cult classic.

So bring your crew, show us your Donkey Roll, and never stop never stopping at our POPSTAR Sing-Along. With fun props and lyrics up on the screen, you’ll be belting out all of Conner4Real’s greatest hits so loudly it’ll be like you just opened your Aquaspin refrigerator. DOINK DE DOINK!