Full Moon gets HIDEOUS when the mutant baby monster shocker hits blu-ray for the first time ever on March 21st! 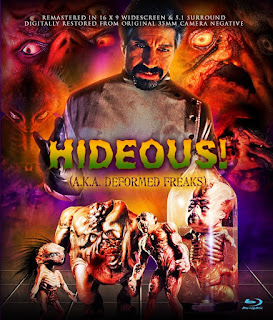 You never know what weirdness you’ll find in the sewers as a hapless treatment worker discovers when he enters the diabolical world of Charles Band’s HIDEOUS! Upon trudging through the subterranean sludge and doing his doody-sifting duty he comes across a pack of strange deformed mutant babies and monsters that he takes to the black-market in hopes of making a quick buck. What happens next is the sort of high-concept B-movie absurdity that only Band and veteran strange cinema writer Neal Marshall Stevens (THIRTEEN GHOSTS, RETRO PUPPET MASTER) could dream up, as evil doctors and mad hustlers vie to get their mitts on the re-animated miniature mutants. Gore, sex and wanton weirdness ensues.

If it’s a tasteless, terrifying and slickly produced trash masterpiece you’re looking for, look no further than HIDEOUS!  This one has it all!

Starring Mel Johnson Jr, Michael Citriniti, Rhonda Griffin, Tracie May and the amazing, smoking hot Jacqueline Lovell from Band’s HEAD OF THE FAMILY(also out now on Blu-ray) and boasting a startling electronic music score by the great Richard Band, the utterly insane HIDEOUS! makes its Blu-ray premiere in a stunning Special Edition, with a crisp HD transfer remastered from the original 35mm camera negative.