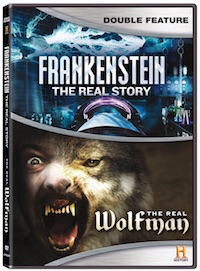 SYNOPSIS
The Frankenstein: The Real Story collection from HISTORY® examines how the tale of a brilliant but deranged scientist who builds a grotesque monster from the body parts of fresh corpses has its roots in reality. “In Search of the Real Frankenstein” looks at scientists throughout history who experimented with reviving animal and human corpses to find the secret force of life. “Frankenstein” explores the fact-or-fiction origins of the tale that became the first science fiction novel. “It’s Alive! The True Story of Frankenstein” further traces the story through all its artistic renditions, from 19th-century stage adaptations to 1930s silent films to Mel Brooks’s satirical Young Frankenstein and Kenneth Branagh’s faithful horror interpretation. This spectacular set features interviews with actors including Gene Wilder and experts on Mary Shelley, the 19th-century novel, the horror genre, cinema makeup, and much more.

SYNOPSIS
In the mid-1700s, a mysterious beast viciously attacked and killed 102 villagers in the French village of Gévaudan. The victims, mostly women and children, were mauled and decapitated, their naked bodies all bearing the savage bite marks of a non-human creature. The killings marked the largest number of alleged werewolf attacks in history and are a contributor to the Hollywood “Wolfman” legend. Venture deep into the mythology and folklore of werewolves with renowned cryptozoologist Ken Gerhardt and veteran criminal profiler George Deuchar as they investigate the reviled creature believed to brutally kill when the moon is full. Their investigation includes intriguing paranormal transformations, diseases that make men look and act like animals, and strange but true stories of children raised by wolves. What they uncover in the dark side of human nature is the horrific truth behind the Gévaudan werewolf attacks, and the wolfman within us all.