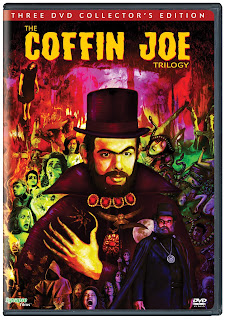 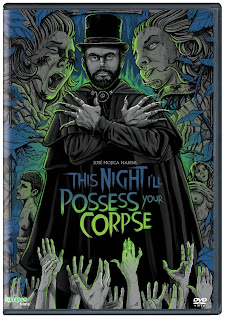 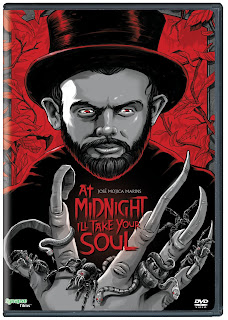 One of horror’s most original and creative figures, Brazil’s José  “Coffin Joe” Mojica Marins has made a massive impact on filmmakers for decades, with his legendary “Coffin Joe” trilogy considered by many to be among the most nightmare-inducing horror films ever made.  This January, Synapse Films is proud to present the trilogy – AT MIDNIGHT I’LL TAKE YOUR SOUL, THIS NIGHT I’LL POSSESS YOUR CORPSE and EMBODIMENT OF EVIL – on remastered DVD complete with new special features for a new generation of fans and admirers!

Coffin Joe (known as Zé do Caixão, and portrayed by director José Mojica Marins) is a mysterious undertaker in a small Brazilian town. He frowns upon religion and is bitter because his wife cannot bear him a child. After violently killing his wife with a venomous spider, the murder, mutilation and blasphemy escalates as Joe stops at nothing to find a new woman to continue his evil bloodline. The town’s gypsy has a warning for Coffin Joe… the spirits of those he killed may return to claim his soul! Will Coffin Joe escape the wrath of the dead and finally get the child he’s always wanted, or will unholy terror claim him for his hideous crimes?

AT MIDNIGHT I’LL TAKE YOUR SOUL is celebrated as the first true horror film ever made in Brazil and is extremely graphic and frightening for its time. Startling, atmospheric and incredibly gruesome, this film is followed by THIS NIGHT I’LL POSSESS YOUR CORPSE and EMBODIMENT OF EVIL (all available from Synapse Films).

THIS NIGHT I’LL POSSESS YOUR CORPSE (1967)
This sequel to the ground-breaking Brazilian horror masterpiece, AT MIDNIGHT I’LL TAKE YOUR SOUL brings back the demented murderous caretaker, Coffin Joe (known as Zé do Caixão, and portrayed by director José Mojica Marins).

Surviving the terrors of the first film, Coffin Joe is now joined by a hunchbacked assistant named Bruno to help him on his unholy quest for the perfect bride. After kidnapping and torturing women and submitting them to sadistic trials, Joe thinks he’s finally found the right woman to bear him a child. Unfortunately, things don’t go as planned and Joe suffers horrible nightmares from killing a pregnant woman. What follows is a hallucinatory descent into the Hellish underworld as Joe struggles to survive his blasphemous visions and the wrath of the local villagers.

THIS NIGHT I’LL POSSESS YOUR CORPSE is even more brutal than its predecessor, and contains the controversial color “Hell” sequence. This film is the second installment in the “Coffin Joe Trilogy,” and is followed by EMBODIMENT OF EVIL (also available from Synapse Films).

THE COFFIN JOE TRILOGY
Unholy undertaker, sinful savant, denizen of dreams and hallucinations… Coffin Joe, with his trademark top hat, black cape and long talon-like fingernails, is a horror legend across the world. Portrayed by prolific Brazilian director José Mojica Marins, “Coffin Joe” has been immortalized in films, TV programs, comic books and popular songs. Marins has a strangely personal filmmaking style that can only be compared to an unholy blend of Russ Meyer, Mario Bava and Luis Buñuel. Synapse Films is proud to present “The Coffin Joe Trilogy,” a three film DVD collection containing AT MIDNIGHT I’LL TAKE YOUR SOUL, THIS NIGHT I’LL POSSESS YOUR CORPSE and EMBODIMENT OF EVIL. This trilogy of films contains the classic story of Coffin Joe’s descent into madness and violence as he murders and tortures men and women in his unholy quest to find the perfect bride.

SPECIAL FEATURES:
• Contains all special features from the single disc releases, as well as additional special features for EMBODIMENT OF EVIL, including a “Making of” featurette, Theatrical trailer, and footage from the Fantasia Film Festival premiere. (25 mins.)

SPECIAL BONUS OFFER TO THOSE THAT PURCHASE THE SYNAPSE FILMS VERSIONS OF “AT MIDNIGHT I’LL TAKE YOUR SOUL”, “THIS NIGHT I’LL POSSESS YOUR CORPSE” OR OUR NEW “THE COFFIN JOE TRILOGY” DVDS!

Synapse Films has a small quantity of some Brazilian “Coffin Joe” comic book reproductions. While supplies last, each person that orders the Coffin Joe films, from Synapse-Films.com, will receive a comic book with their order.

Please note, regarding the first two Coffin Joe Films, AT MIDNIGHT I’LL TAKE YOUR SOUL and THIS NIGHT I’LL POSSESS YOUR CORPSE:
First, the licensor ONLY provided us with standard definition scans of the original negatives. We have no plans for a Blu-ray release because they did not do HD scans for us. We have not been given any indication that HD scans can be done on this already fragile material. These scans and transfers were supervised by director Jose Mojica Marins.
Synapse Films’ release of AT MIDNIGHT I’LL TAKE YOUR SOUL, THIS NIGHT I’LL POSSESS YOUR CORPSE and THE COFFIN JOE TRILOGY will be available on January 31, 2017.