Blair Witch Arrives on Blu-ray Combo Pack (plus DVD and Digital HD), DVD, Digital HD, and On Demand on January 3

“Horror will never be the same.”
— Brad Miska, Bloody-Disgusting.com

There’s Something Evil Hiding in These Woods

The Sequel to the Game-Changing Horror Phenomenon
Arrives on Blu-ray™ Combo Pack, DVD, and Digital HD January 3 from Lionsgate 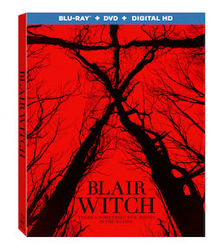 A group of college students venture into the Black Hills Forest in Maryland to uncover the mysteries surrounding the disappearance of their friend’s sister, who many believe is connected to the legend of the Blair Witch. At first the group is hopeful, especially when a pair of locals offer to act as guides through the dark and winding woods, but as the endless night wears on, the group is visited by a menacing presence. Slowly, they begin to realize the legend is all too real and more sinister than they could have imagined.

Get over 3 hours of bonus features on the Blair Witch Blu-ray and Digital HD, including an audio commentary with director Adam Wingard and writer Simon Barrett, the “House of Horrors: Exploring the Set” featurette, and a 6-part Making-of documentary, “Never Ending Night: The Making of Blair Witch”. The DVD release includes the audio commentary and the “House of Horrors: Exploring the Set” featurette. The Blu-ray Disc of Blair Witch will feature a Dolby Atmos soundtrack remixed specifically for the home theater environment to place and move audio anywhere in the room, including overhead. Blair Witch will be available on Blu-ray Combo Pack and DVD for the suggested retail price of $39.99 and $29.95, respectively.