One of legendary filmmaker Dario Argento’s most shocking and fantastic films is finally available on Blu-ray in the U.S. in an amazing new release from Synapse Films!  Released in the U.S. as CREEPERS by New Line Cinema, 1985’s PHENOMENA is has long been one of Argento’s most discussed and debated films by fans and scholars, and now it’s available in a definitive 3-disc Steelbook® that will make it a must-have release for Argento fans all over the world!

The young Jenifer Corvino (played by Oscar-winning actress Jennifer Connelly, in one of her first film roles) is sent to a private Swiss academy for girls where a vicious killer is on the loose, brutally murdering students. Jennifer is a “gifted” girl with the strange ability to communicate with insects, and Dr. McGregor (Donald Pleasence, John Carpenter’s HALLOWEEN series, ESCAPE FROM NEW YORK) enlists her to help locate the killer. Jennifer finds herself in a bizarre murder plot with maggots, mutants, and razor-wielding chimpanzee mayhem! Can she uncover the killer’s identity before becoming a victim herself? Daria Nicolodi (TENEBRAE) and Fiore Argento (DEMONS) also PHENOMENA also features fantastic soundtrack music from progressive-rock favorite Goblin, British Heavy Metal masters Motörhead & Iron Maiden, Andi Sex Gang, Bill Wyman and Simon Boswell!
star in this strange, unique and gory film from Italy’s Master of Horror, Dario Argento. 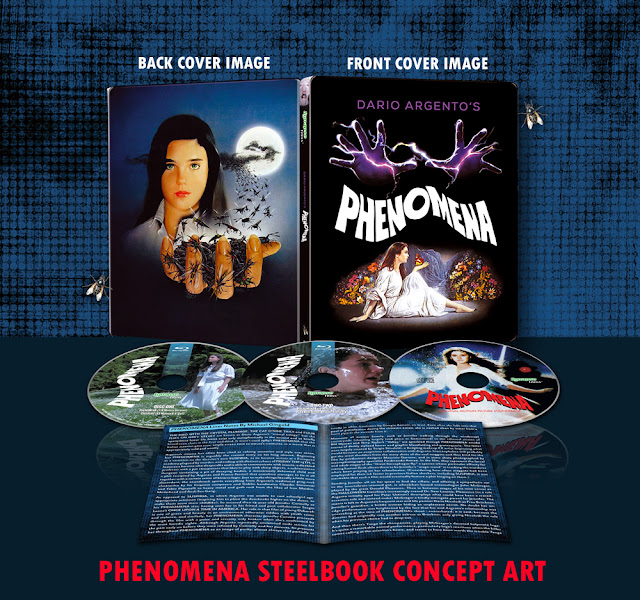 DISC 1 (Blu-ray)
PHENOMENA (116 minute version)
This English/Italian hybrid cut of PHENOMENA contains an additional six minutes of material not seen in the 110 minute version. Completely remixed by Synapse Films to seamlessly integrate the additional Italian audio segments into the feature, and remastered in high-definition, this version of PHENOMENA is now available for the FIRST TIME EVER in North America!

DISC 2 (Blu-ray)
PHENOMENA (110 minute version)
This international version of PHENOMENA was released in 1985 and contains almost 30 minutes of additional footage not seen in the CREEPERS U.S. version. Completely remastered in high-definition and released, for the FIRST TIME EVER, on Blu-ray!

This Original Motion Picture Soundtrack CD contains the complete 16 track Goblin instrumental score for PHENOMENA, along with four additional music tracks from Andi Sex Gang and Simon Boswell. This compact disc, exclusively available from Synapse Films, is the first time these music tracks have been included on the same compilation.

The retail price of the PHENOMENA Limited Collector’s Edition Blu-ray Steelbook® is $39.95 (plus $6.00 packing/handling fee like our previous Limited Steelbook® releases. Synapse Films personally and securely wraps/packs/insures and ships each and every Steelbook individually with additional packing necessary to keep it safe on its way to your home.)

The 3000 unit PHENOMENA Limited Collector’s Edition Blu-ray Steelbook® is available exclusively through the Synapse Films website at: www.synapse-films.com. All international orders will be handled via the fine folks at DiabolikDVD: www.diabolikdvd.com.  Projected street date is November 15, 2016. Shipping to customers will commence on that date, or as soon as the release is received at Synapse Films. If they come earlier than the 15th, they will ship to customers earlier. 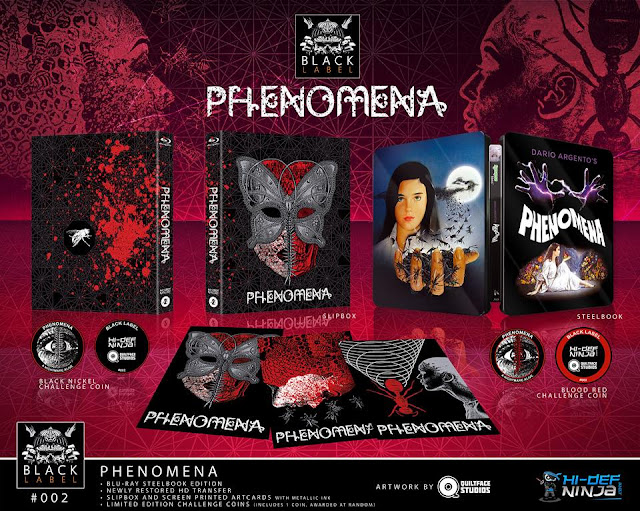 This release of PHENOMENA is REGION A.