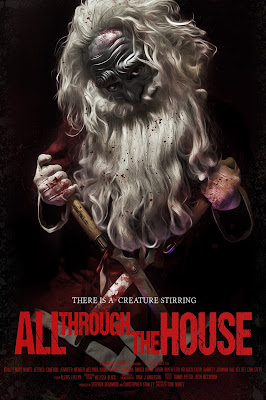 Los Angeles, CA – Spread the Christmas fear with ALL THROUGH THE HOUSE – a Santa slasher film making its U.S. debut on all major VOD platforms October 4, 2016, released by Gravitas Ventures. ALL THROUGH THE HOUSE is produced by The Readmond Company and written/directed by Todd Nunes. VOD Platforms include: iTunes, Vudu, Google Play, Hulu, Playstation, Amazon, and Microsoft. The DVD/Blu-ray version is available on Amazon.

“I have always loved holiday horror films, and am so thrilled to have been involved with two thus far in my career,” says scream queen Jessica Cameron who is featured in the film. “ALL THROUGH THE HOUSE is a refreshing take on the sub genre with a fun 80's influence that I know the fans will adore as much as I do. The director Todd Nunes, is a phenomenal talent and mark my words, this is just the beginning of what will be a brilliant career. I can not wait to see what he does next.”

Jessica Cameron will join the cast and crew of ALL THROUGH THE HOUSE at a DVD/Blu-ray signing on Sunday, October 30, 2:00pm at Dark Delicacies, Burbank, CA.

"ALL THROUGH THE HOUSE is my love letter to the early 80's slasher films,” says writer/director Todd Nunes. “I think we put together all the right ingredients – scream queens, practical effects, and big scares to make old school horror fans very happy.”

SYNOPSIS: Fifteen years ago, a peaceful Christmas neighborhood was engulfed by fear when five-year-old Jamie Garrett was mysteriously taken from her bedroom never to be seen again. Now on Christmas break, Rachel Kimmel comes home from college to find her neighborhood struck again by a reign of terror. A violent killer is hiding behind a grisly Santa mask, leaving a bloody trail of slaughtered women and castrated men to the steps of the Garrett house. Rachel finds herself in a horrifying nightmare as she discovers the twisted secret behind the mask.
“Nunes does a fantastic job of making sure to keep the blood flowing and having each kill be distinctive and superb in its own way.” – THE MOVIE SLEUTH

When asked about her experience as Rachel, star Ashley Mary Nunes said “...Of course I loved my character, because she is strong and complex, but I’m really drawn to the twisted and crazy characters she meets in this movie. The Killer in ALL THROUGH THE HOUSE is disturbing, gross and also unique - I’m fascinated by the depraved impulses. I know that everyone is going to love all the gore and violence, but there is also a twisted mystery that ties it all together like a big Christmas bow.”

"Never have I played a person who was so emotionally wretched as Mrs.
Garrett. There was no easy way to get into that character. At one point, in order to break me down for a particularly difficult scene, the Director, Todd Nunes, locked me in a tiny, dark bathroom for an hour. Ultimately, I hope the character inspires curiosity and pity, and, hopefully, more than a little revulsion. You will never look at Christmas the same way again. I know I won't." said Melynda Kiring about taking on her role as Mrs. Garrett

Lito Velasco spoke fondly about All Through The House and what inspired him to take on the role of a maniacle version of a holiday icon... "Initially, I wasn't interested in playing simply another
mindless, faceless killer. But after I read the script, I was sold. Further, Todd's direction allowed me to create and flesh out a real character with a true story and motivation for their actions. I'm so very excited that people everywhere will  finally get to see what all of us involved in the making of this movie have been so proud of for so long."

"What's really great is you will find satisfaction in the homage paid to the slasher films of the past, while keeping it it's own tale. Remember when slashers were great? This is definitely the perfect reminder." - Danny Mozz of The SHOCK! Chamber

“If you want a nostalgic holiday ride reminiscent of classic slashers, "All Through The House" is definitely for you. It's one of the best independent horror films being released this year.” – MIDNIGHT HORROR SHOW

“If you LOVE 80’s style slasher flicks such as “Friday the 13th”, “Sleepaway Camp”, and“Halloween”, then this is right up your alley” – Mick Mack at the Movies

“All Through the House is the perfect stocking stuffer, the perfect present under the tree. It’s an unpredictable gore fest filled with holiday cheer and unadulterated horror” – HORROR SOCIETY